This is Canada: a canvas for small things.

This is Canada, where the sky can swallow your thoughts. There are no trees here, or very few, just the raw horizon furred with autumnal grass, and the sky above it reinvents itself almost every minute of the day.

Six years was too many. I don’t even know how many times I’ve been to Canada – 15? 20? – but for a variety of reasons this wild and perplexing country dropped off my radar after 2012. Coming back, remembering the sky, grateful for the air that is still flavoured with the crisp northern bite.

We landed last night at the heart of Canada, in the historic if climatically-challenged city of Winnipeg. There are no easy roads to the village of Val Marie; this time we’ve chosen to drive from the east, some 850 kilometres.

Prairie, prairie, prairie: mostly arable farmland these days, although just occasionally you catch glimpses of its glorious wildlife-filled past. Say ‘Canadian wilderness’, and most people visualise the western mountains or boreal forests – but the prairie held far higher numbers of wild things, once. Grasslands National Park in Saskatchewan protects the best habitat left, but on the way there, there are many surprises.

The Souris River, for one. At 700 km, it is small by Canadian standards, but is still longer than England. Like most of the prairie landscape, it is a nod to past glaciation – its basin was once filled by the now-extinct Lake Souris.

Canadian royalty, for another.

After a full day of driving, we still have many hours to go. Pulling into Assiniboia, we are greeted by a great horned owl perched on the grain elevator. 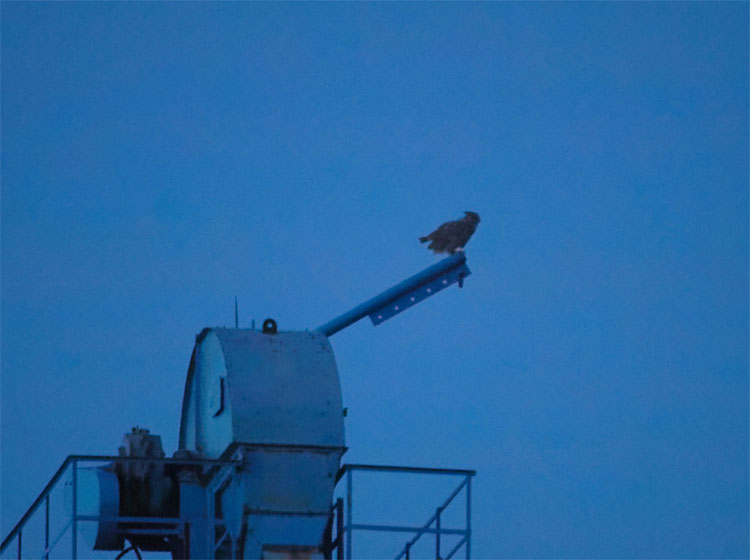 Looking for rodents attracted to wheat being transferred to the grain train, no doubt. Some wildlife takes full advantage of its human neighbours.

But many other species need wilderness proper. Tomorrow, we’re back on the road and turning south east.