Humanity is a puppet danced by a tyrant called Weather. We have moments when we delude ourselves that we are free – we sit under roofs, delight in air conditioning, and warm ourselves with fires – but we all secretly know that respite from Weather’s commands is temporary. Walking in the tropics brings this home: temperature and humidity are with you at every step. 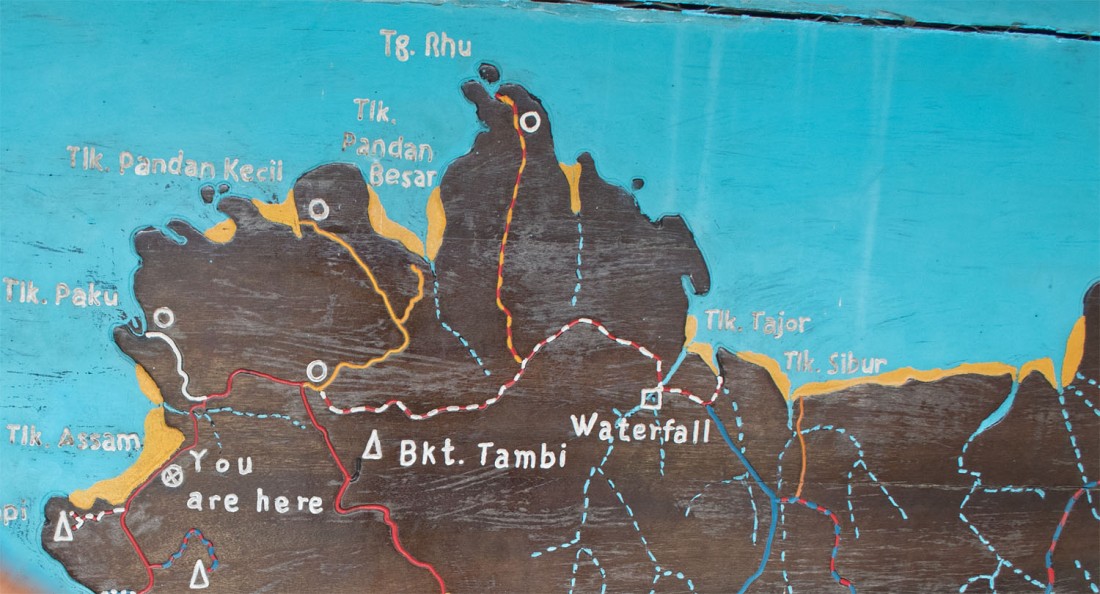 Plants are living things. We underestimate them because they are less mobile than animals, but they have a presence, a purpose, and sometimes even a menace. Bako is a rainforest and the trees are its soul, its master, and they are not abashed to remind paths of their supremacy. 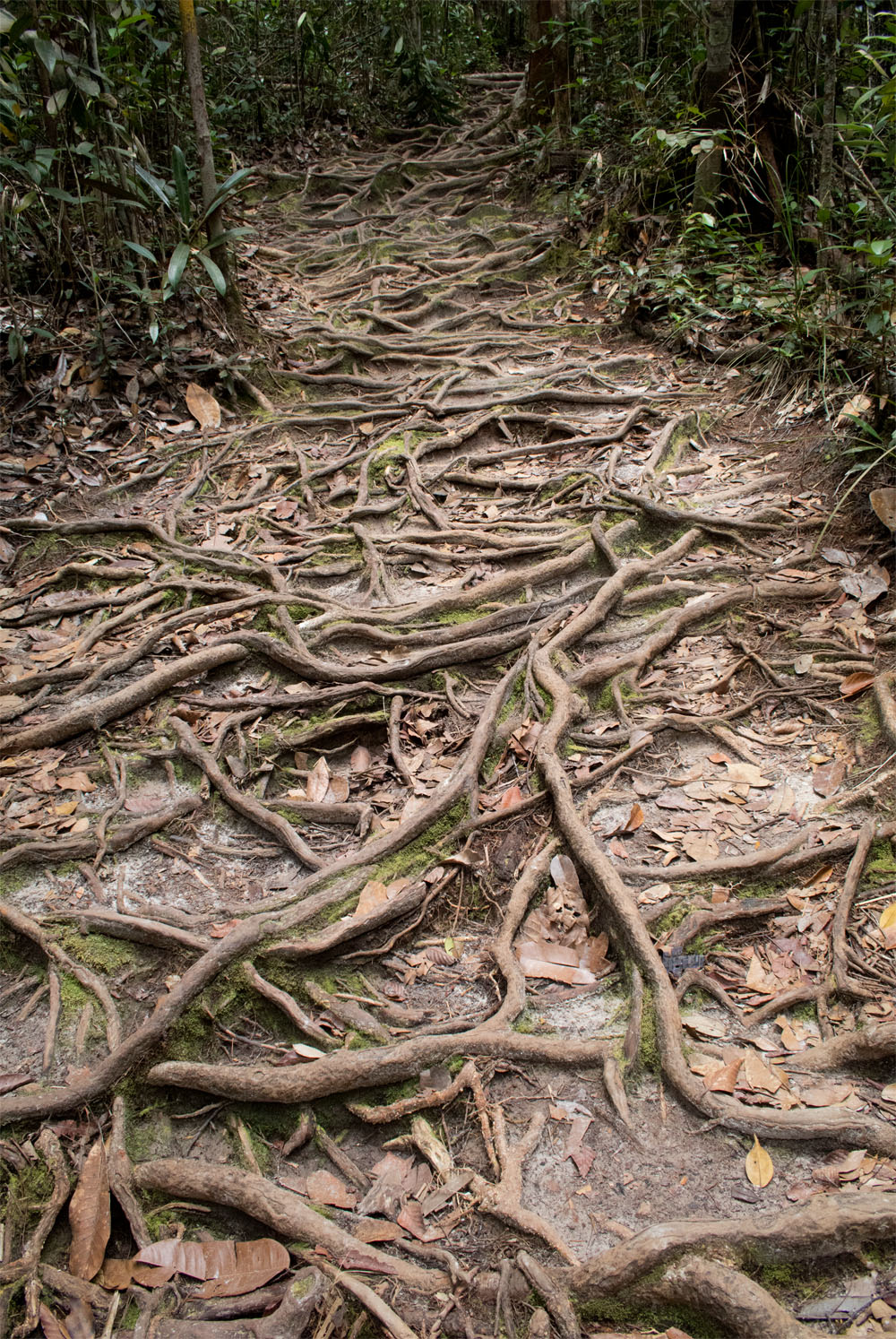 Within the tangle of leaves and roots, many animals thrive. Borneo giant ants are an impressive sight. 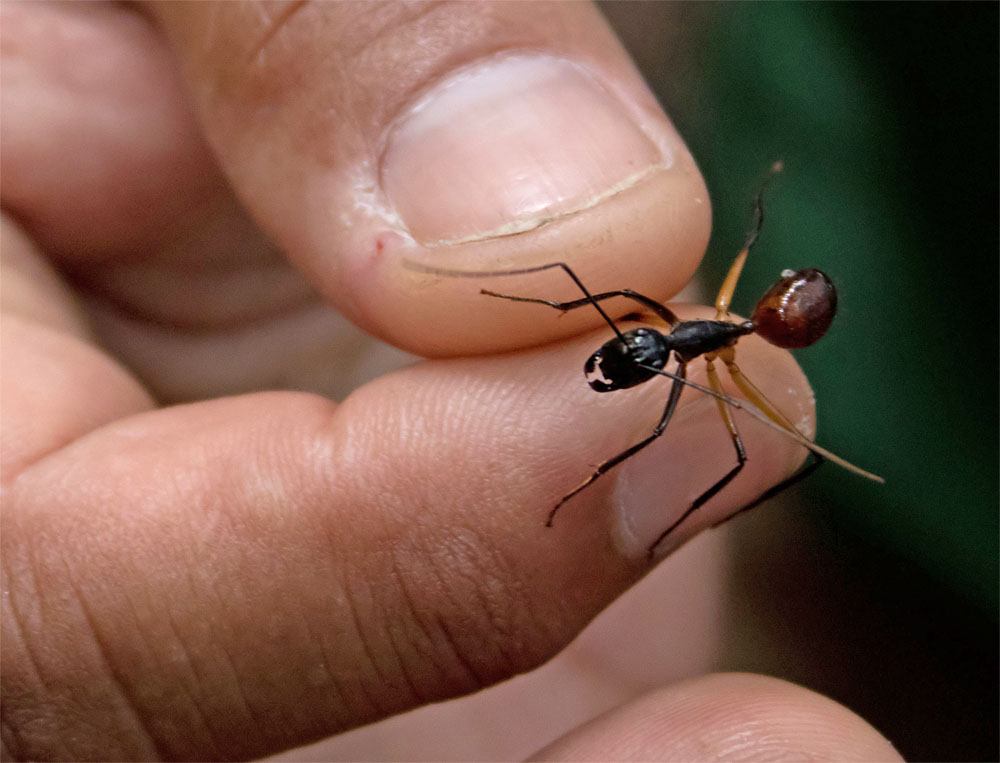 The top of the ridge is pock-mocked with erosion from rain. Limestone always remembers any bruises from water. 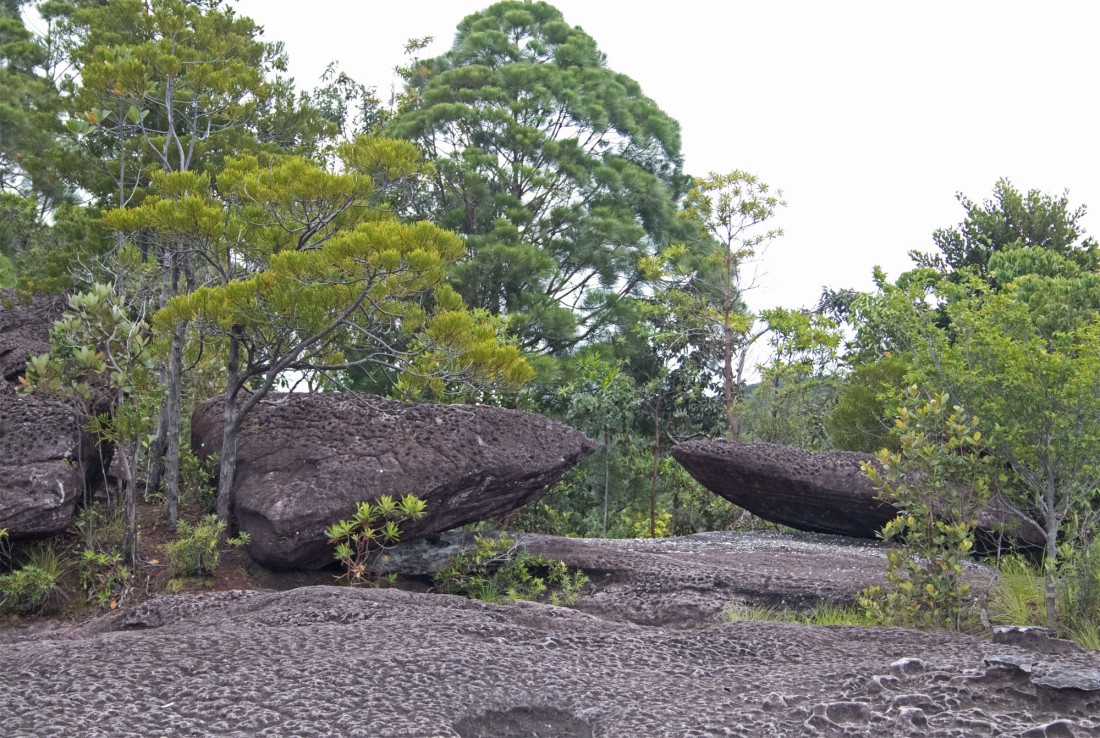 Far more than the jungle below, this is a harsh place for a plant to make a living. And if they cannot take nutrition from the ground, there is always another, more proactive way to make a living.

Pitcher plants are carnivores. They lure insects with nectar but they are a one-way trap. Hairs on their flanks prevent the prey from climbing back down, and if the animal falls inside, it is consumed by the plant’s enzymes. Most of their prey are invertebrates, but they occasionally catch frogs and have even been known to ‘eat’ rats. 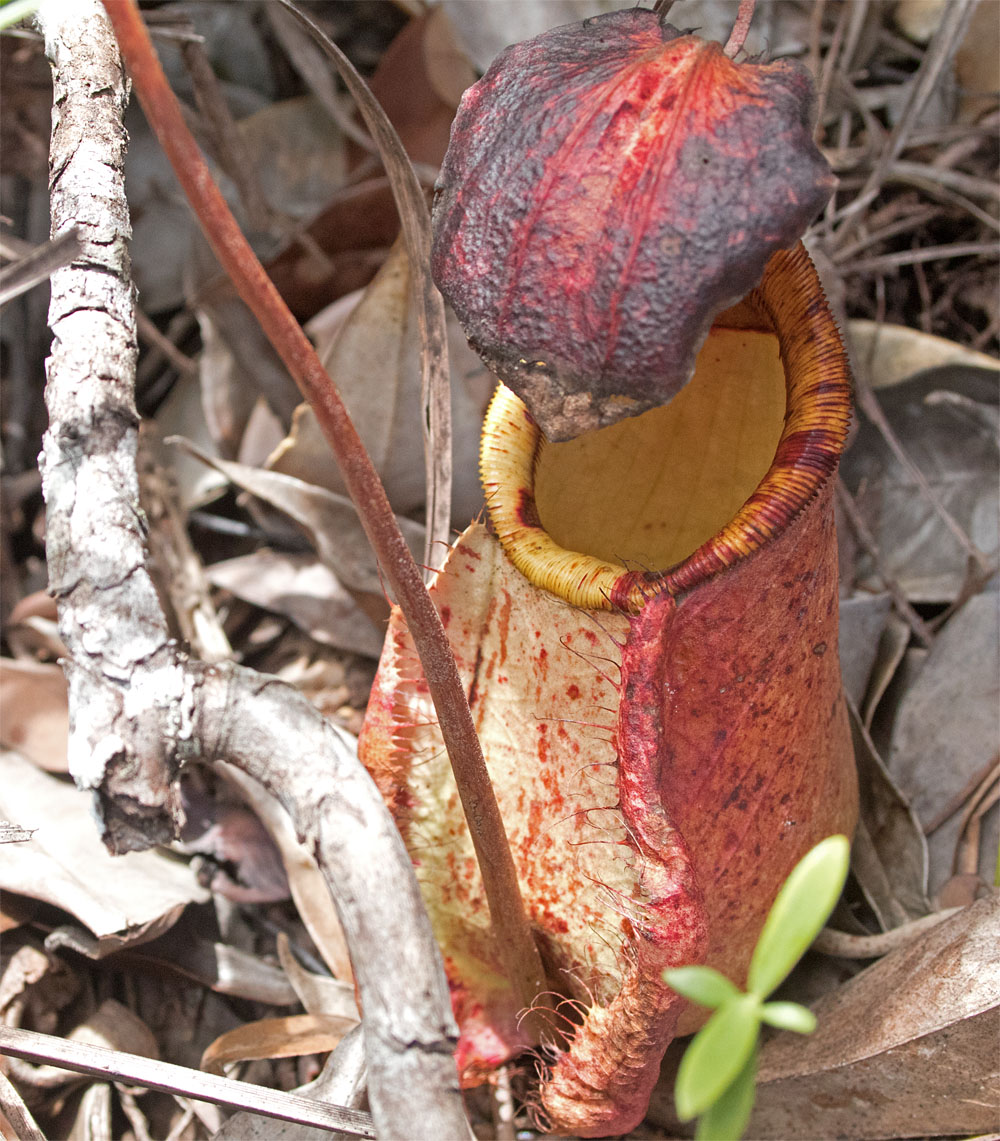 Dozens of pitcher plant species exploit the animals of Borneo. Some rest like pitfall traps on the ground, and others dangle from trees. 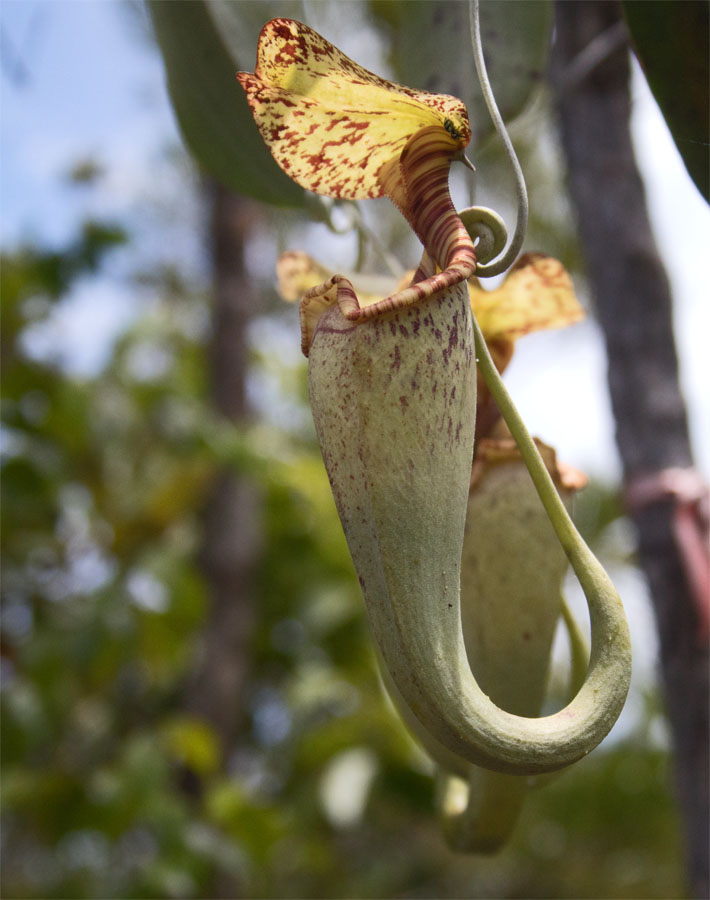 And they raise an interesting point. We think of clouded leopards and crocodiles as Borneo’s top predators, but perhaps that is just the human whimsy of wanting nature neatly organised into tables. Ecological food chains are much better described as ‘food webs’. Pitcher plants are kings of their own part of the forest, feasting on species that will never catch the leopard’s eye.

High above the sea in this thin forest, the sun burns hot, and then hotter. We hear stories of tourists who died here; never, ever, underestimate the power of dehydration.

Our path continues down rickety stairs. 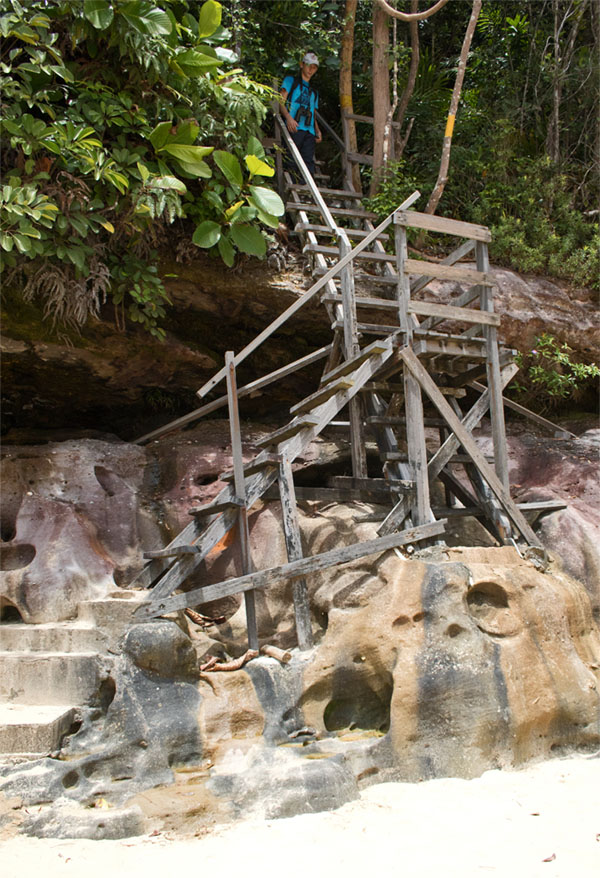 The South China Sea lies ahead.

A little boat drives us around the headland back to our starting place. Bearded pigs watch the sun falling into the sea.

2 thoughts on “Sarawak: Hiking in Bako”